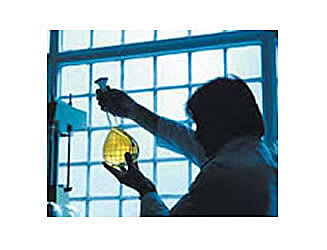 Evaluation of the Bacteriostatic Properties of a Water Treatment Device Containing an Alloy of Copper and Zinc (KDF® media).

Water treatment devices may be colonized by bacteria and thus promote the growth of bacteria contained in the influent water. It is important, therefore, that devices that are intended for use in potable water supplies be tested to determine if they are bacteriostatic (i.e. do not stimulate the growth of microorganisms).

The testing protocol used is described in Table 1. This procedure provides a heavy bacterial challenge over a seven day period followed by a period of time to allow the growth of the challenge bacteria. If the treatment device provides an environment that is favorable for bacterial growth, there should be a demonstrable increase in bacterial numbers during the latter stages of the test.

In order to test the device, the model water system diagrammed in Figure 1 was used. The supply water for the model system was chlorine free deionized water that was reconstructed to approximate Detroit city water by the injection of AOAC synthetic hard water to achieve a final concentration of 100 ppm and a pH value of 7.0

A fresh suspension of Enterobacter aerogenes (former name Aerobacter aero genes) was prepared daily and injected into the flowing water stream to achieve a final bacterial concentration of 300 cfu/ml.

The results of the 19 day bacterial challenge test are shown in Table 2. For the first seven days Enterobacter was injected into the influent water stream and the survivors that passed through the test device were measured. There were endogenous bacteria (naturally occurring water bacteria other than Enterobacter) present in the model water system at the beginning of the testing, and there was a large reduction in these bacteria as a result of passage through the water treatment device. The results shown in Table 2 for the first seven days of testing show the Enterobacter survivors only. The measurements after 11 and 19 days, during which time no additional Enterobacter was injected into the system, the results in Table 2 show the percent reduction in these endogenous bacteria (no Enterobacter survivors were detected).

This testing showed that the water treatment device is bacteriostatic and does not stimulate the growth of Enterobacter nor does it provide an environment that promotes survival. In addition, the device is effective in reducing the concentration of Enterobacter or other endogenous bacteria present in the influent water (bactericidal effect) and thus may be useful in the control of potentially harmful bacteria that may inadvertently enter potable water supplies.