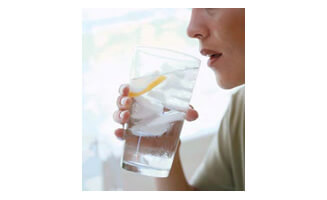 Determine the effect of KDF Process Media on bacteria removal in water. If there is biocidal action of KDF, determine if the mode of action is by direct contact or by the release of soluble toxic compounds.

A: Effect of KDF on Ps. Fluorescens:

The results of four tests using Ps. Fluorescens and the testing protocol described in Table 1 are shown in Table 2. The bacterial in Samples 1 and 3 (Controls) survived well during the three hour incubation and indicated that there was nothing toxic in the system.

Sample 2 contained water that had been eluted through the KDF column prior to inoculation and there is substantial die-off of the bacteria compared to the control water. This die-off is very likely die to small amounts of copper and zinc ions that are eluted (less than 0.025 ppm copper and less than 1ppm zinc). This result is not unexpected since it is well documented that copper is toxic to bacteria.

Sample 4 contain bacteria that have passed through the KDF column. In the time required to collect the water sample and plate "Time 0" (not a true time 0, since 2 to 3 minutes elapse before plating) there has been substantial kill of the injected bacterial inoculums. This result has been reproducible in all experiments and the only reasonable interpretation of this result is that contact with the KDF column is toxic to Ps. fluorescens. This toxicity is substantially more that can be explains by soluble toxic compounds (comparison of Samples 2 and 4).

B: The Effect of Voltage Applied to the KDF Column:

Brass screws were inserted in the top and bottom of the KDF column. A voltage of 0.02 to 0.05 volts is produced by the column, depending on the water that is in the column. It was thought that the voltage generated by the column might be responsible for the observed direct-contact bacterial kill.

If this were true, the application of additional voltage should increase the toxicity of the column. The experiment shows that there is a slight effect on bacterial survival if 11.7 bolts are applied to the column as the injected bacteria are passing through. Most of the effect, however, is during the three hour incubation rather than during the initial direct contact. It seems very unlikely that the voltage generated by the column can be responsible for the reduction in bacterial numbers that is observed.

The effect of KDF on Legionella pneumophila (Philadelphia 1 strain) was measured using the standard testing protocol described in Table 1. The effect of contact with KDF appears to be very similar to the results for Ps. fluorescens.

This preliminary experiment offers some promise that KDF may have applications for the control of L. pneumophila, especially in recirculating water systems such as cooling towers and domestic hot water where repeated contact would occur.

The observed decrease in redox potential of 500 millivolts is very likely to be the mechanism by which KDF exhibits bacterial toxicity by direct contact. A rapid shift from an oxidizing to a reducing environment should cause severe stress to the bacteria.

E: Removal of chlorine by KDF:

In order to measure if a 3 gallon water flow between sampling conditions was sufficient to reach a stable equilibrium, a 1000 ppm solution of sodium hypo chlorite was injected through Injector #3. The calculated concentration of free chlorine in the system at the maximum pump rate (120 pulses per min) was 21 ppm.

The measured free chlorine (Hellige DPD method) with and without passage through the KDF column is shown in Table 3. The KDF column removes chlorine and the response of the water system is linear.

F: Production of chlorine from chloride:

Another possibility for the mode of action of KDF had been previously suggested. If the column oxidized chloride to chlorine by contact with the column, this could explain the observed phenomena. Various concentrations of chloride ion (as sodium chloride) were passed through the KDF column and free chlorine was measured in the eluted water. Even at 6800 ppm chloride no free chlorine could be detected. The eluted water was checked for interference with the detection and there was no interference.

The KDF column could produce low levels of chlorine that are immediately removed, but this possibility seems unlikely based upon the results reported above (D:).

These studies have shown that KDF possesses inherent toxicity to Ps. fluorescens that requires direct contact for maximum efficacy. The mode of action is likely to be via a rapid reduction in redox potential as water-borne bacteria contact the column.

There seems to be great potential for this material to serve as an effective water treatment device to reduce or remove water pathogens such as Legionella pneumophila without the need for introduction of pesticides into the water.